Nollywood Movies You Can Stream On Netflix 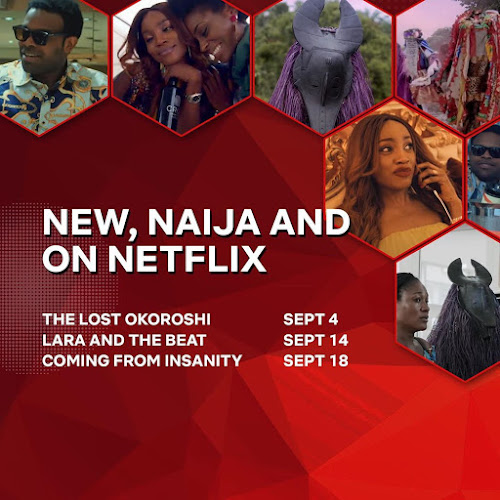 Netflix is adding more Nollywood to its streaming platform for Nigerians and everyone to stream in comfort.  The platform is yet to introduce three more Nollywood movies to their streaming platform for Nigerians and the world to stream, in September.
These movies include; The Lost Okoroshi (2019),  Lara and the Beat (2018), Coming from Insanity (2019).
The Lost Okoroshi will be added on September 4th. The Lost Okoroshi tells the story of a man haunted by dreams of an ancestral Okoroshi masquerade, the disillusioned security guard wakes up one morning to find himself transformed into a mute, purple spirit, in Abba Makama's surrealist romp through the sprawling city of Lagos. Directed by Abba Makama, Written by Abba Makama, Africa Ukoh and stars Seun Ajayi, Judith Audu, Tope Tedela.
while Lara and the Beat will be added on September 14th. Lara and the Beat is a coming of age movie about the young and beautiful Giwa sisters caught in the center of a financial scandal with their late parents' Media Empire. The sisters are forced out of their privileged bubble and must learn to build their own future - through music and enterprise - to salvage their family's Legacy. Directed by Tosin Coker,  Written by John-Arthur Ingram, Kay I. Jegede, Pearl Osibu, and stars Ademola Adedoyin, Kemi Lala Akindoju, Chioma Chukwuka Akpotha.
Coming From Insanity will be added on September 18th. Coming From Insanity tells the story of an ambitious currency agent becomes determined to bring a talented counterfeiter to justice. Directed by Akinyemi Sebastian Akinropo, Written by Akinyemi Sebastian Akinropo, and it's cast includes Sharon Ooja, Gabriel Afolayan, Dakore Akande, Adeolu Adefarasin, Damilola Adegbite.

/fa-envelope/ NEWSLETTER$desc=Subscribe to get our top stories delivered to your email. No Spam!